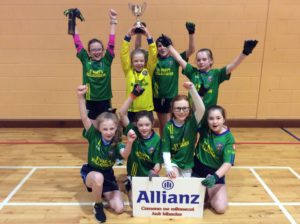 Having won a regional heat back in November, our girls were up against the other regional blitz winners from across Armagh. They knew it was going to be a high standard and that they would have to be at the top of their game to compete. The girls put a great effort in during the group stages against Crossmaglen and Tannaghmore to qualify for the semi-finals. After defeating a very strong Middletown team in the semis, the girls secured the trophy by defeating Tannaghmore in the final. Our girls proved that their determination and will-to-win matches their talent.

There were jubilant scenes at the final whistle and back in school, when the girls returned with the cup. Everyone associated with the school is extremely proud of your efforts today and it is worth noting that the girls football panel extends well beyond the eight girls who attended today, with around twenty girls across P6 and P7 attending weekly training.

The good news is that the journey doesn’t end here and our ‘indoor team’ now move on to represent Armagh in the Ulster Final Blitz in Magherafelt on March 31st.

Thanks to Mr Paul Doyle from Armagh CBS for coordinating the blitz and Silverbridge GAA for hosting.